A legend tells of a giant who had taken up residence in the ruins of the castle that dominates the village in the company of a magpie and that he terrorized the people of the village. One day Guilhem, had the idea to dress up as a servant and bring water up to the castle to fight this impostor.

He armed himself with “Joyeuse”, his legendary sword, and walked to the castle. On the way, the magpie who watched over the sourroundings noticed that the silhouette of the girl was slightly different.

The bird recognized Guilhem and went to warn the Giant. Unfortunately, the Giant didn’t listen to these warnings and opened wide the door of his fortress. Followed a tough fight of which Guilhem emerged victorious, and the giant was thrown at the bottom of the cliffs.

The magpie which had lost his protector, fled and went into hiding somewhere else. Since that day, the villagers live in peace and the Valley is frequented by many species of birds, but they never saw magpies again. 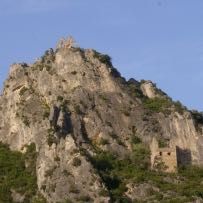