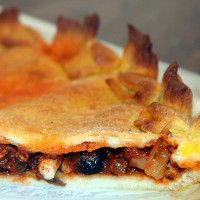 The tielle is now well set up in Sète culinary landscape, with its beautiful orange color you can not miss it on the market stalls! This pie stuffed with octopus cooked in a slightly spicy tomato sauce is a typical Mediterranean product. It came from Italy in the suitcases of immigrants settled in Sète in the nineteenth century. Its name comes from the terracotta dish, “teglia” in which it was cooked. Originally it was prepared with the remains, so it could be garnished with sardines, eggs or zucchini …

In Sète it was the ordinary food for fishermen settled near the port, so the food was naturally essentially from fishing. It was a complete dish that could be kept for several days. At the time when refrigerators did not exist, it was important especially when you went for several days at sea …

First considered a poor dish, it was later adopted by the entire population and made famous by the Cianni and Dassé families, whose shops are still to be found in and around Sète. Hot or cold, it is delicious accompanied by a salad as a starter.

Where can you find some tielles ?

It is now available in many supermarkets but it is much better fresh, here are the addresses of some craftshops:

You will obviously be spoiled for choice, try them to find your favorite!

Tielles Giulietta
29 Avenue Victor Hugo, Sète
Open from Monday to Saturday from 8am to 1pm and from 4pm to 7.30pm

You will also find them all in the Market hall, rue Gambetta, open every day from 7h to 14h.

Discover the local gastronomy with our excursion every Thursday: “Market and winemaker’s lunch”